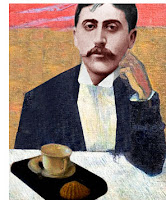 Last night at the Memory Network, we explored the work of the neuroscientist Gordon Shepherd who has disputed the idea - regularly rehearsed by Proust writers -  that the memories that emerge in the famous Madeleine cake passage of À la Recherche du Temps Perdu are involuntary. As Gordon’s daughter, the drama historian and literary scholar Kirsten Shepherd-Barr (University of Oxford)  explained, the memories of Combray don’t simply pop up from the tea cup as he tastes his tea-dipped cake.
The narrator is depressed by the gloomy weather and this makes him better disposed for the experience.  He follows a deliberate process to will the memory to rise by carefully spooning the tea-soaked cake to his lips. This creates a moment of joy and elation and a feeling of immortality.  The moment fades as he becomes desensitized to the flavours and he wills it to return. He clears his mind and attempts to pull the memory and emotions up from the depths of his mind, but it remains out of his grasp.  It is only after beginning again ‘ten times’ that the memory resurfaces. This extraordinary moment is the result of an ordinary, routine action of taking tea and cake, after a struggle of effort. The memories therefore are the result of 'metonymic expansion' that also draws on voluntary memory - something that I hope to understand better after reading Kirsten and Gordon's article!

The Memory network is an AHRC funded project to foster engagement with new critical perspectives from biosciences, psychology and computer science by exploring memory in literature.  It is researching memory, consciousness and cognition as a subject of literary-scientific enquiry.  After hearing from the Memory Network team we were invited to participate in a number of experiments – smelling various things to see if we could identify them, whether they inspired memories etc.   It was suggested by one of the panel that the problem of recognizing a smell and being unable to identify it may be due to the brain competing for the same resources for different uses at the same time.  Apparently, in the situation where you are struggling to name a smell it may be easier to write it down than to try to say it.

I’ve come away from The Proust Phenomenon with a desire to read the madeleine passage much more carefully, to share my chapter on Sadakichi Hartmann’s perfume concert (in Art, History and the Senses, Ashgate 2010) with Kristin who has written on Paul Fort’s multisensorial performance experiments held at the Théâtre d’Art in the 1890s, and to try out my new party trick on you all....

Hold your nose tightly, pop a jelly bean into your mouth and start to chew.
What do you taste?    Salt, sweet and sour…
Now let go of your nose.    Notice how all the delicious fruity tastes burst forth!
Remember our tongue detects salt, sweet, sour and bitter.  Much of the taste of food comes from its smell.
I’m looking forward to reading Kristin’s article ‘Madeleines and Neuromodernism: Reassessing Mechanisms of Autobiographical Memory in Proust’ published in Auto/Biography Studies published in Spring 1998 (vol 13, no 1) and to more @memory_network events.
The only thing sadly missing was madeleines and tea.
Posted by Christina Bradstreet at 03:54