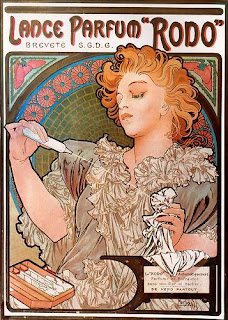 Last week I spoke at the The Society of Dix-Neuviémiste's conference on The Senses, held in Limerick at Mary Immaculate College.  http://www.sdn.ac.uk/limerick/SDN2012Programme.pdf

My paper was on Floral Asphyxiation in Victorian art and my next post will talk more about this.

A paper that particularly grabbed my attention was by Cheryl Krueger (University of Virginia) on the Uses and Abuses of Perfume.

Cheryl explored the startling accounts in American (and then British) newspapers in the 1890s about decadent, bohemian Parisian women injecting perfumes such as patchouli into the skin and even the blood stream in order to perfume the body. This is an area that I have also been exploring in recent times, and I was relieved to find that like me, she has not found much concrete evidence that such a craze existed.  Nevertheless the idea of excessive use and abuse of perfume as a solitary transgressive bedroom activity endured in the popular nineteenth-century century imagination and in literature including Edmond de Goncourt's Cherie (1884), and I would add Swinburne's Lesbia Brandon in which Lesbia 'kills herself by inches by opium and perfume.' Interestingly, we both showed Mucha's art nouveau poster for Lance Parfum Rodo as suggestive of perfume abuse - and Cheryl noted that this perfume was in fact made from ether.  Having felt a bit anxious about the fact that someone is working so close to my own area, I am now looking forward to working closely with Cheryl in the future, as there are strong crossovers between our work. Cheryl is writing a book about scent in 19th century French literature and it is interesting that a French literature scholar and a Victorian art scholar can find themselves poring over much of the same material. It is very exciting, but also a spur to action, to know that so many others are now working in the area of smell in nineteenth-century culture. Have you come across the idea of perfume injection before and if so where? Do you know anything more about Lance Parfum Rodo or of other advertising images for this scent?
Posted by Christina Bradstreet at 12:49